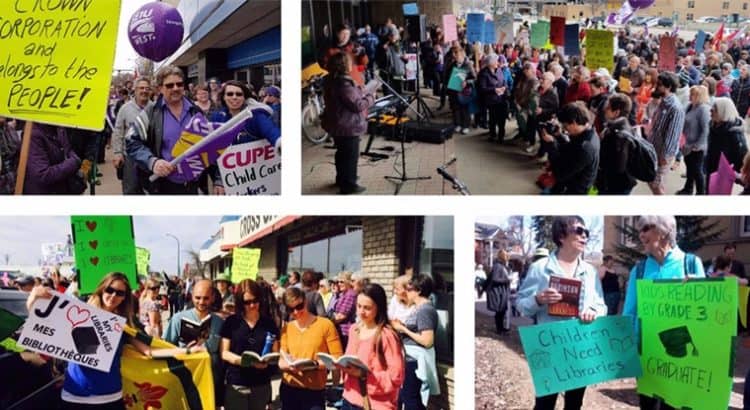 Images from protests around Saskatchewan after the release of the Saskatchewan budget in March 2017, which eliminated an essential transport service (STC) and dramatically cut funding to libraries and other services, while reducing corporate taxes and raising consumption taxes.

There are moments in history where local politics have national, and even international, significance. Saskatchewan is currently living one of those moments.

Have no illusions. The recent provincial budget is about more than reducing government expenditures. It is an act of class warfare, and the beginning of a process of redefining the society you live in – massively reducing the social role of the state, and transferring yet more wealth to the already wealthy. There are three budgets left in the Sask Party’s current mandate and they will be worse than one just announced. They will be about ‘permanent austerity’, not short-term belt-tightening.

We’re being sold a lie. As Nobel laureate economist Paul Krugman has noted, “All of the economic research that allegedly supported the austerity push has been discredited. On the other side of the ledger, the benefits of improved confidence failed to make their promised appearance. Since the global turn to austerity in 2010, every country that introduced significant austerity has seen its economy suffer, with the depth of the suffering closely related to the harshness of the austerity.”

The budget is disingenuous on its own terms. There is a mountain of evidence which demonstrates that taking the knife to education and social programs costs society more over the long term, while dramatically increasingly social suffering in the short term. In Ontario in 1997, one employed person in 40 worked for the minimum wage – but by 2015 it reached one in 8. In BC, poverty among seniors rose from a low of 2.2% in 1996 to 12.7% in 2014 – and many seniors have incomes just above the poverty line. Single women face a particularly high risk of economic insecurity in old age – one-third of single senior women in BC live below the poverty line. This level of immiseration and social abandonment is shameful in a country as wealthy as Canada.

Austerity is not an inevitability. This is no time for despair. You have an opportunity to create a movement of resistance that can turn the tables. That movement must be as historic and transformative as the Sask Party’s master plan is.

Moralistic appeals to those in power will not get our movement very far. The Wall government won’t be stopped simply by rallies outside MLAs’ offices. We must be bolder than that. We must build a common front that doesn’t leave anyone behind. This means putting the needs and voices of people on social assistance, the unemployed, low-income, and disabled, and, crucially, First Nations and Indigenous people, at the core of our fightback.

We need to build a movement of resistance that allows people to shake off their fatalism and their indifference. This means proving that we can make small victories that tangibly improve people’s lives, and thus offer hope and instill the belief that rising up can make a difference.

All Out to Stop the Cuts! Protest the Premier’s Dinner April 27 in Saskatoon