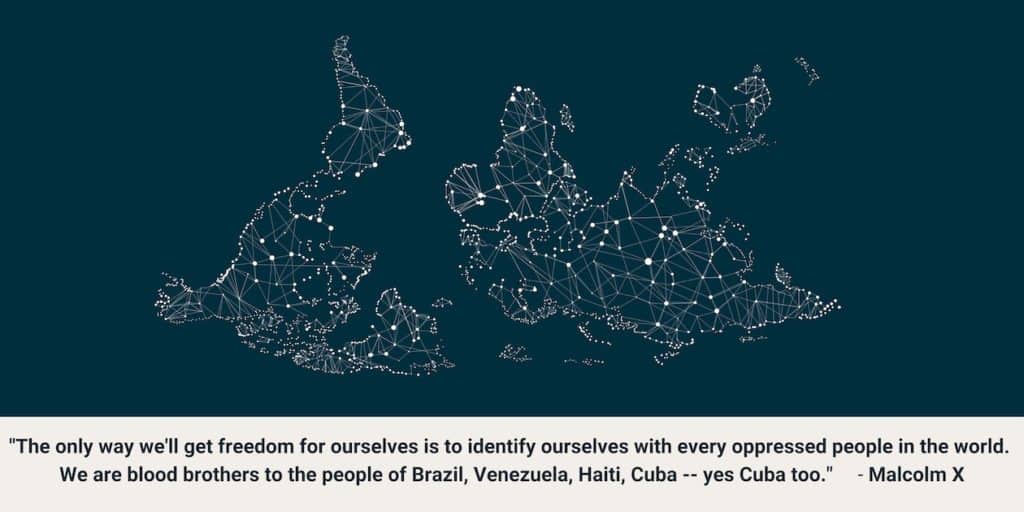 Image Description: An image of the world map depicted as a web of dots representing different cities and locations. The map is an inverted version of how world maps are usually presented. In this image, South America and Africa along the top and North America and North America and Europe along the bottom. Beneath the image is a Malcolm X quote that reads, “The only way we’ll get freedom for ourselves is to identify ourselves with every oppressed people in the world. We are blood brothers to the people of Brazil, Venezuela, Haiti, Cuba — yes Cuba too.”

Every month, we start The Stand’s board meeting the same way. First, we approve new member applications from individuals and grassroots groups. We welcomed two new member groups this month – the Saskatoon Peace Coalition and a brand new organization called the Ad Astra Foundation, which is building international solidarity and using a decolonizing perspective to guide international development work.

Second on the agenda, we have “On Our Radar” – a discussion where we share the issues that have been on our minds. It’s one of our favorite parts of the meeting! It builds connections and understanding, and it grounds our work in the reality of what’s happening in Saskatoon and around the world. Some of our board members moved to Saskatoon from other countries – Brazil, China, and the United States. Issues on their radars currently include:

Our discussion raised broader themes of international solidarity, diasporic responsibilities, and learning from activists in other places. So after the meeting, we reached out to Rodolfo Pino-Robles, a beloved educator, organizer, and musician who came to Saskatoon as part of the Chilean diaspora in the 1970s. Rodolfo is an expert on Indigenous Rights and imperialism and has seen many ebbs and flows of justice seeking efforts, so we asked his thoughts on international solidarity.“For the first time we are seeing tremendous solidarity amongst nations in South America and the Caribbean. This week, June 6, 2022, The United States is hosting the Ninth Summit of the Americas in Los Angeles, California with a focus on “Building a Sustainable, Resilient, and Equitable Future” “for our hemisphere.” However, the only countries invited are those that are to the liking of the USA. Cuba, Nicaragua, and Venezuela were excluded. In response, the 14 CARICOM countries, plus Mexico, Bolivia, Honduras are not attending. 25 Countries have rejected the USA’s attitude by boycotting the Summit.”

When we asked Rodolfo what we can learn from movements in the global south, he spoke of the persistence he has seen over the years. Like the people in Brazil who sustained their protests throughout the 580 day imprisonment of Lula, their former president and leader of the Worker’s Party.

WHAT ELSE CAN WE LEARN FROM GRASSROOTS ORGANIZERS AROUND THE WORLD?

The Beautiful Trouble Toolbox has stories from around the world of “accounts of memorable actions and campaigns, analysing what worked, or didn’t, and why.”

HOW DO WE STAY INFORMED ABOUT MOVEMENTS THAT DON’T GET MAINSTREAM COVERAGE?

Click here to see the list we started of independent, progressive news sources that we’ve started to build.

HOW DO WE SUSTAIN AND FOCUS EFFORTS WHEN OUR HEARTS ARE PULLED SO MANY WAYS?

If you’re a Saskatoon-based BIPOC (Black, Indigenous, Person of Color) activist dealing with stress or burnout, you’re invited to share your experiences with a community project on self and community care. Check here for details.

WHAT’S HAPPENING LOCALLY TO CONNECT US TO STRUGGLES IN OTHER PLACES?
Scroll on for more events and campaigns happening locally and online as part of the growing movements for social, environmental, and economic justice.

Find even more events on The Stand’s Community Calendar